Elizabeth’s side of the story:
My husband decided it was his turn to have a flick through my recipe book and take a pick of what the sisters would cook up this month. It didn’t take a genius to figure out it would be something meaty. Boys will be boys, afterall.

His choice worked in my favour, as I have had my eye on this recipe since December. Bertus Basson was the genius behind this recipe. Last December we spent some time in Stellenbosch and visited his new restaurant “Spek & Bone”. The restaurant is named after his pet pig and dog. “Guests can enjoy local seasonal ingredients in sharing plates, with Bertus’ signature South African flavours paired with specially selected South African wines under some of the oldest fruit producing vines in Stellenbosch; very fitting for a wine bar!” The food was tasty and original; with dishes like pork popcorn (no, they are not planning to serve up the pet pig EVER) and peppermint crisp cones.

We were thrilled to be able to try one of his recipes in the convenience of our own home. 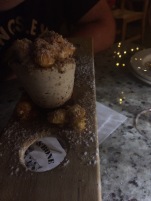 There were seven different components to this recipe. Ranging from the slow roasted lamb, salsa, hummus, beans and even rocket paste. The list of ingredients seemed never ending.
Fresh rotis were required for this and so although not part of our blog requirements for this month I decided to try make them myself. 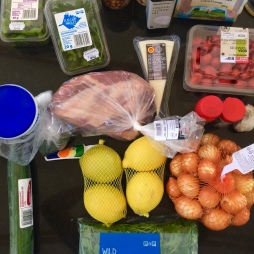 The method for each component was well described and easy to follow. The recipe does require that you commence cooking the day before. I did all my preparation on the Saturday morning in preparation for dinner at 7pm. 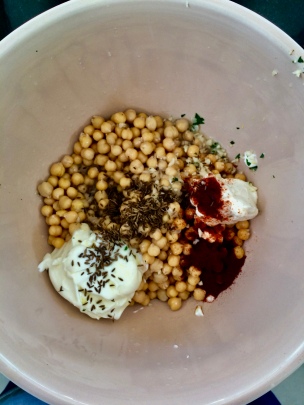 Although the method was simple, uncomplicated and the ingredients were easy to source, I did find it very time consuming to make hummus, tomato salsa, rocket paste, cucumber salad, beans and Gremolata oil. They all had fabulous flavours but that was expected after all the time and effort it had required to make each of them.
I was surprised that the lamb didn’t require anything more than a little salt rubbed into the skin.

The recipe was time consuming and required a lot of preparation. Each component had so many ingredients, requiring careful chopping and measuring to ensure they would turn out as intended. The time consumed and the dishes dirtied are defiantly factors I would take into consideration before attempting this recipe again.

Time and dishes aside, the Lamb boer-rito was good, although I did expect it to taste better considering all the flavours it contained. It did, however, have amazing individual flavours and I liked that I could change the tastes drastically between servings. My first boer-rito was served as suggested, but my second was created without the components containing parsley and coriander, which I’m not a huge fan of and find very over-powering.

It is something I would make again but I’m not certain I would make all of it again. I would defiantly use the recipes for some of the components in other meal options. 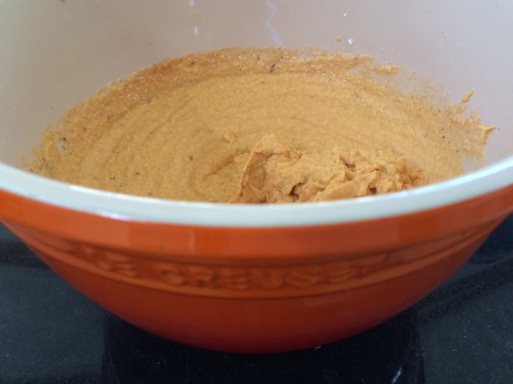 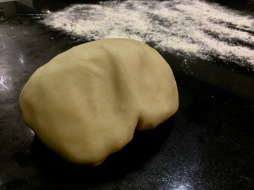 The recipe suggests that it will feed 6-8 people but because my hubby has exams coming up this week I decided to half everything ( except the hummus) as we weren’t planning on a large group for dinner. Halving the recipe still fed three people with leftovers.

There were things in the recipe that I wouldn’t usually have like sesame oil and wholegrain mustard and so it was a little more pricey than previous recipes. 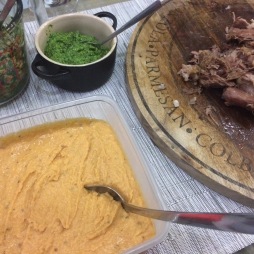 I have a very good friend, who happens to be Greek. She hilariously once shared with me the story of how Greek relatives, flown in from Greece for her wedding, were painstakingly kneading and rolling dough into paper thin sheets in preparation for her wedding to make Filo Pastry.  They were proficient at making Filo Pastry, they made it all the time, but the question is, did the home made filo pastry make the baklava or galaktoboureko taste better than it would have tasted with shop bought filo pastry?

Some things do taste better homemade. But there are an equal share of things that are just not worth the effort. Filo pastry is one of those items.

Several of the items on tonights menu, are also just not worth the effort – in my opinion. The cost, both in time and ingredients just doesn’t warrant the effort. My favourite hummus for example, costs just £1,99 whereas the chickpeas alone cost £2 for this hummus. And that isn’t taking into account the many, many, many, many, many, many dishes that required washing up after preparing this meal. 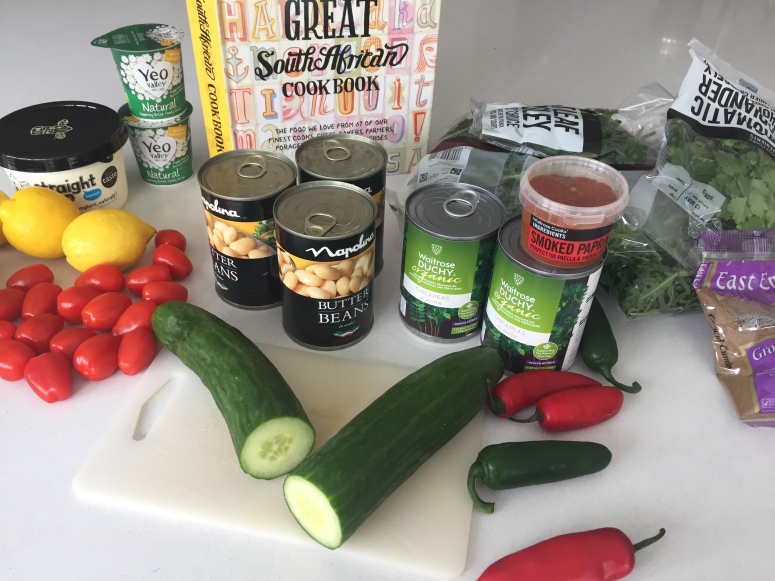 Although, having said all that – this was a very easy recipe to follow. Everything was well explained and put into a logical order. It was time consuming and required a huge amount of varying ingredients and dozens of dishes and measuring cups and blenders and spoons – but it was simple to follow. I love a dinner that can be prepared and left, so that on my return home “Bon Appétit” dinner is served. So the bottom line is, super easy, but super time-consuming! 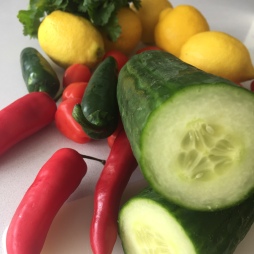 The jury is still out on this one. Both my husband and daughter loved the meal and despite not lifting a finger in its preparation, think it is well worth the effort. (Hmmmm) My son and I are however not as impressed.  Personally, with the number of ingredients and varying items, I expected an explosion of tastes in my mouth with every bite and instead, I found the combination somewhat bland. I think that I will make components of this recipe again, but some components I will add my own spin and some components I will just buy.

As there were so many components to this meal and many items are not standard items in our household, this was a more costly meal than others have been. 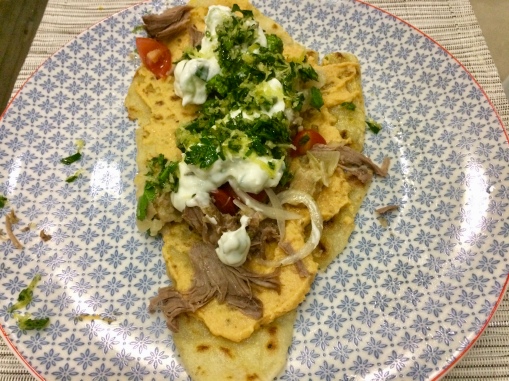