RECIPE NO. 11 (5TH/6TH OCTOBER 2017)
THE MEAL:  LAYERED LAMB BIRYANI AND BAKED NECTARINES
WHO CHOSE IT: INGRID

Walter loves Lamb Biryani, and if ever we order an Indian Take Away – this is what he orders. I have never ordered it, but I always have food envy and will delve into his biryani and exclaim that ” next time” I too will order the biryani. So when it came to my turn to chose the next meal, the obvious choice was of course Lamb Biryani. And who can go wrong with any baked fruit, accompanied by ice cream on a cool autumnal day as the seasons morph into cooler days?

The Biryani had an unusually long list of ingredients, but the majority are spices and items that I always have in my pantry cupboard. The only items that I needed to buy, were the lamb knuckles, lentils, fresh coriander and yellow food colouring. (Which in the end, I inadvertently left out – I know, that’s against the rules!)

The baked nectarine were on the other end of the spectrum, with very few ingredients and as simple as 1, 2, 3! A lovely warm and hearty pudding that I could easy consume Every. Single. Day.

As per usual, I didn’t read the method of the biryani thoroughly enough. Fridays are always insanely busy and so had I glanced at the recipe and thought that arriving home at 19h00 would buy me enough time to get the meal made before guests arrived at 20h00. I also glanced at it enough to assume that you couldn’t make the meal in advance. (An incorrect assumption, because practise has shown me that curries always taste better a day later) So nothing went according to plan, and once the work began, I realised that the “20 minute” preparation time was a very conservative estimation. I do think that this is a meal that I could make in less time with more practise and tweek to perfection 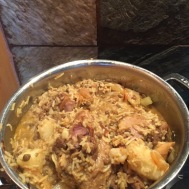 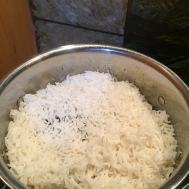 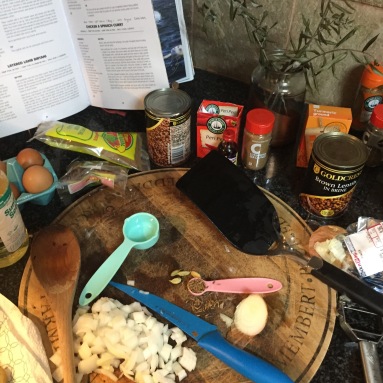 Elizabeth’s side of the story:

Although I didn’t choose this meal, it is a special one. I had plans to cook something special for my hubby’s birthday and conveniently Ingrid picked one of his favorites: lamb.

I made him bacon on toast served in bed for breakfast. He requested ‘Burger King’ for lunch and our blog meal,was a surprise, for dinner. There was no shortage of protein intake on the 5th of October this year.

Baked nectarines are one of our household favorites since getting The Great SouthAfrican cookbook just before his last birthday,so I was delighted to include them as one our blog meals.

The baked nectarines on the other hand are as simple as 1,2,3. Nectarines, butter, sugar, aniseed and cinnamon. The recipe says to serve with vanilla ice-cream but because we have used followed the suggestion before, we opted to serve it with our favourite, TinRoof: vanilla, with chocolate swirls and almonds. DIVINE!

THE METHOD:
The biryani is time intensive but didn’t compare to the time required preparing the boer-ritos a few months back. The potatoes and onions are fried and in a separate pot the oil is frangraced with spices and onions. This aroma was mouth watering. A little bit later the lamb is added, with more spices and finally topped with boiling water, allowing the lamb time to tenderise.

When the meat is tender and the liquid reduced the fun really begins, it is called “layered” biryani after all. The potatoes are layered on the lamb liquid, followed by cream and lentils. Rice is added to the top, followed by more lentils. Chopped butter, some water, food colouring, and onions are the last to be layered. The lid is sealed and the rice is steamed through the layers.
Do you see what I mean?… its A LOT of work!

The nectarines can be explained in two sentences. Melt the butter, adding sugar, spices and nectarines. Pop the dish into the oven for 20 minutes and TaDa!

I did enjoy the lamb biryani, as so did my husband. The cut of meat wasn’t too fatty for me but I could have done with it being cut into smaller pieces from the beginning with less big chunks. The recipe recommended 500g rice, and I only made 350g which made the hugest pot of rice EVER! We ate left overs for 4 days for lunch and dinner and it still wasn’t finished. The recipe suggests a serving for 4-6 people. I believe it serves way more. My conclusion: I have tasted better biryani and although I haven’t ever made it before, it was more work than I feel its worth. Our favourite Indian restaurant in Pretoria still makes it better. 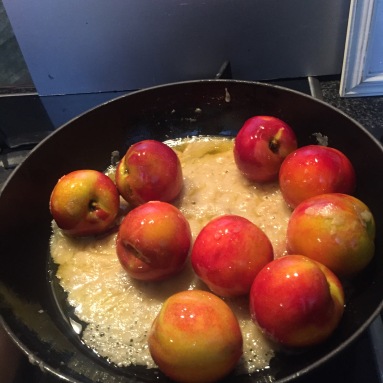 The nectarines are always a win. They are juicy and the toffee sauce is heavenly. Paired with ice cream, it’s one of my favourites.

In the chaos of our move and unpacking I lost my slips and so my guess would be approximately R250 for both dishes.

DID WE RATE THIS:

NEVER AGAIN | OCCASIONALLY | ONCE A MONTH | A FAMILY FAVOURITE